2012-2015
A collective work generated in collaboration with Katherine Hubbard
The Poetry parade… is a thematic migrating feminist literary intervention that takes place within the collections of public art museums.

The Poetry Parade for a Permanent Collection, Museum of Modern Art, November 10, 2012
The inaugural action took place throughout the 4th and 5th floors of the permanent collection at the MoMA. With an inter­est in disrupting the stasis and authority of a permanent collection—the ‘parade’ is a slow migration of a group of readers and gallery goers through that stopping periodically to coalesce around a specific work and read a text aloud. Texts were chosen and paired with works to open new meanings between the works and texts that may act as a celebration, a critical homage, or confrontation. 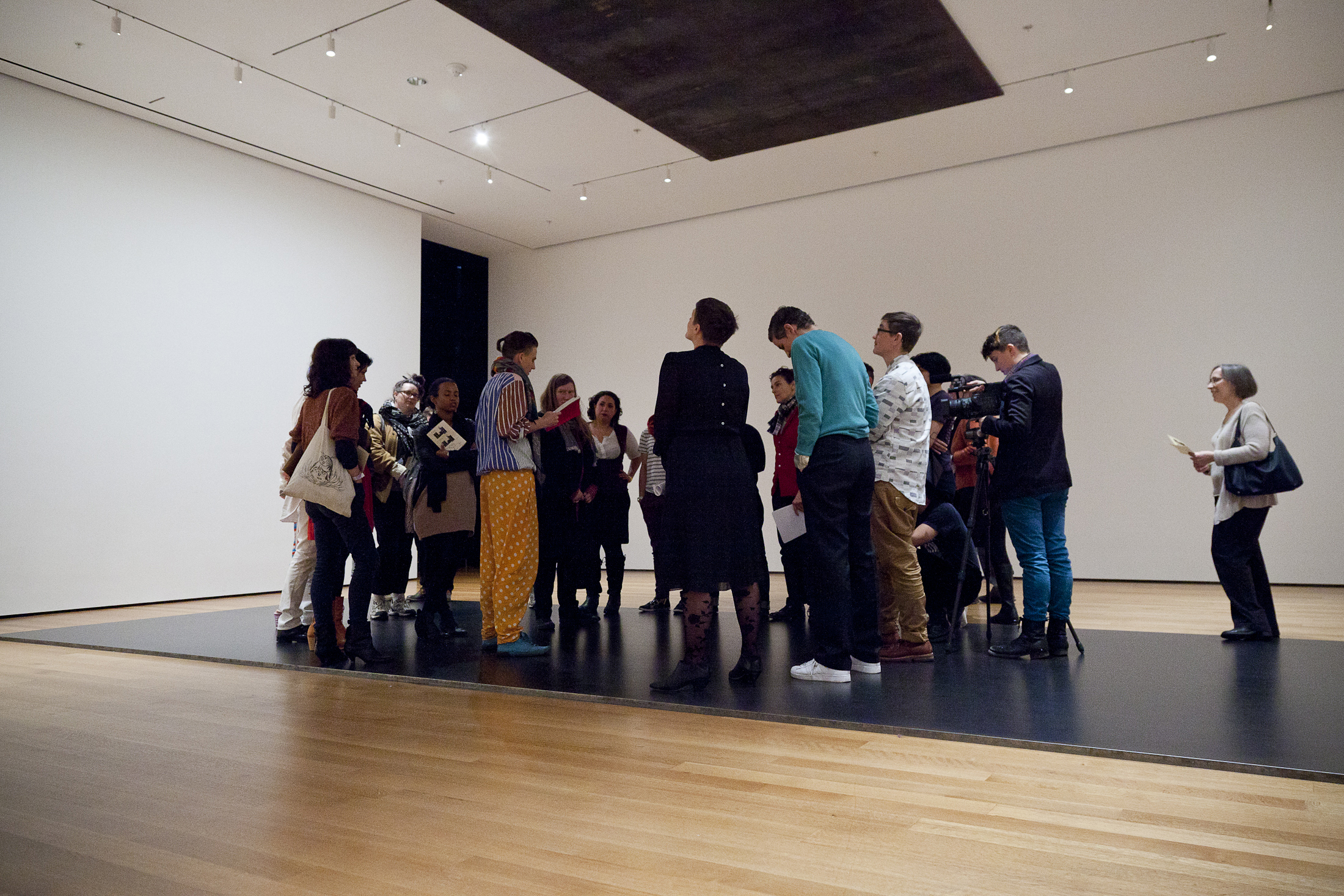 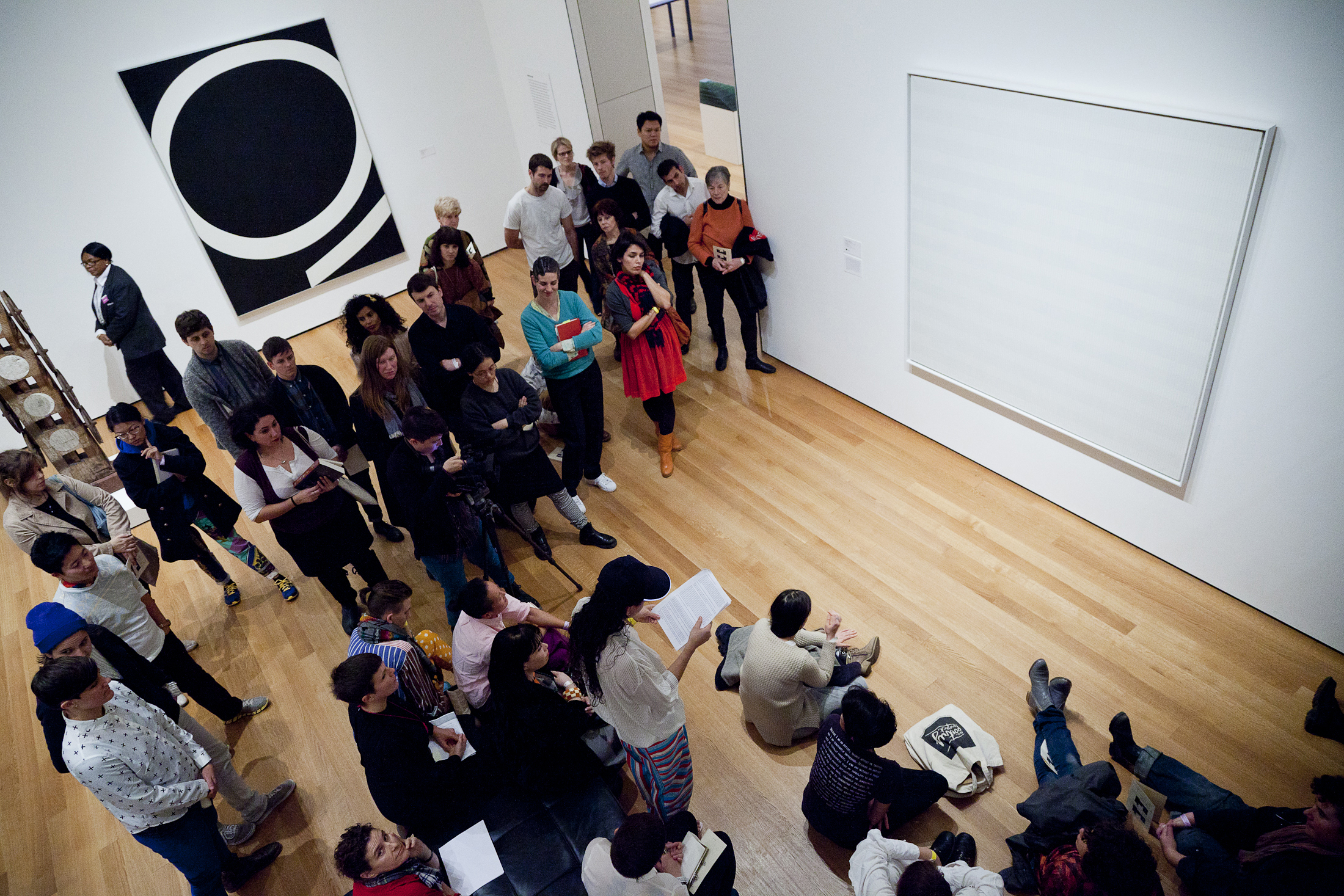 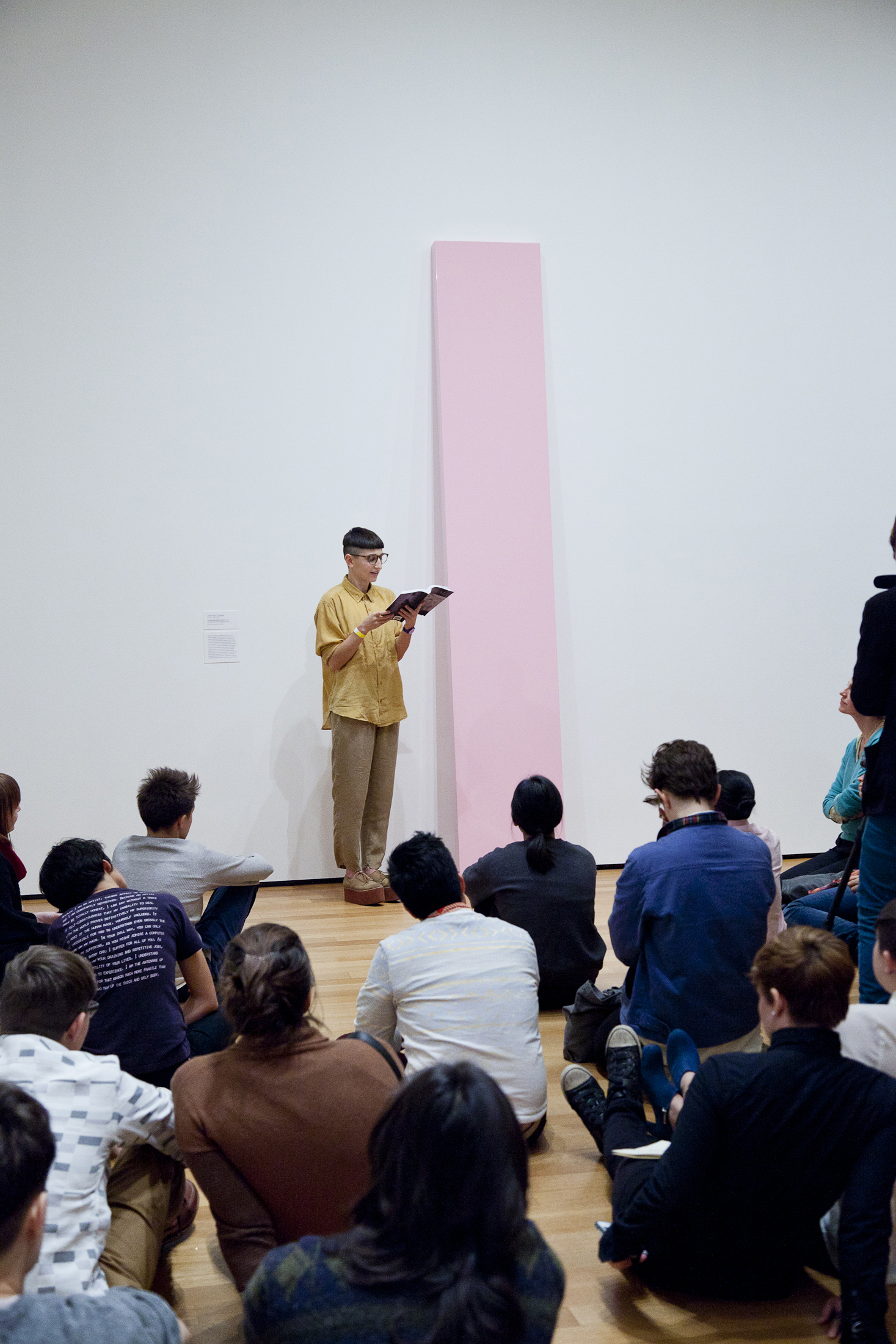 The Poetry Parade for Hortense Fiquet at the Met, February 2, 2015
This project was commissioned by the Artist’s Institute, whose season was dedicated to Carolee Schneemann, and made in response to the Metropolitan Museum’s exhibition Madame Cézanne. As a young girl, Carolee wished to discover woman painters as she perused art history books. She thought she had discovered a mentor in Cézanne, when she mistook ‘Céz-Anne’ for a woman’s name. Later, in the early 70s, she re-appropriated her childhood confusion as a banner for exploring how women had been misrepresented in the arts, publishing a collection of writings titled Cézanne: She Was a Great Painter. This ‘Poetry Parade’ is titled after Madame Cézanne’s maiden name, Hortense Fiquet, and is an opening to reconsider the contributions of women in the arts, not as muses, props, wives, or possessions but as active participants. 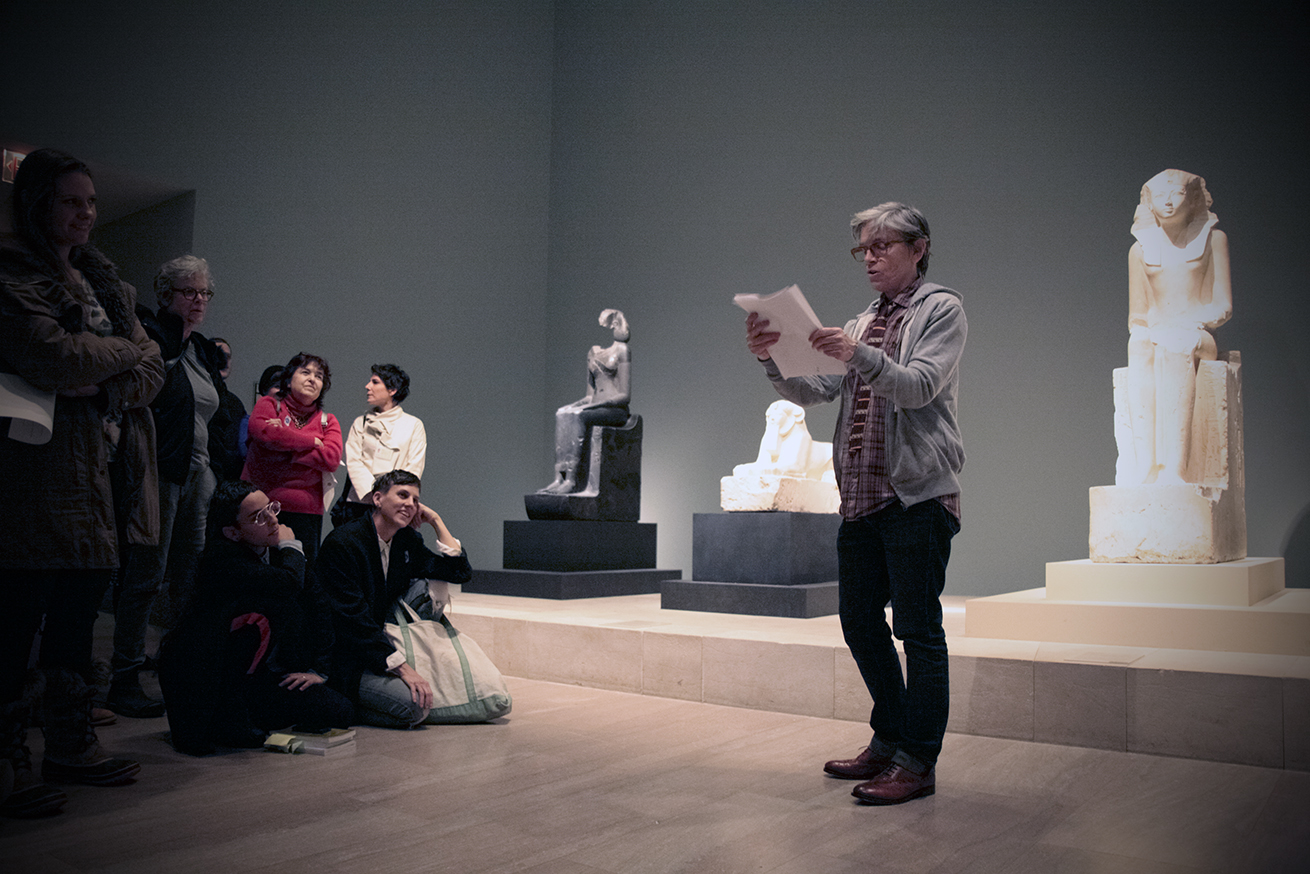 Eileen Myles reads an excerpt from her book Afterglow (a dog memoir). 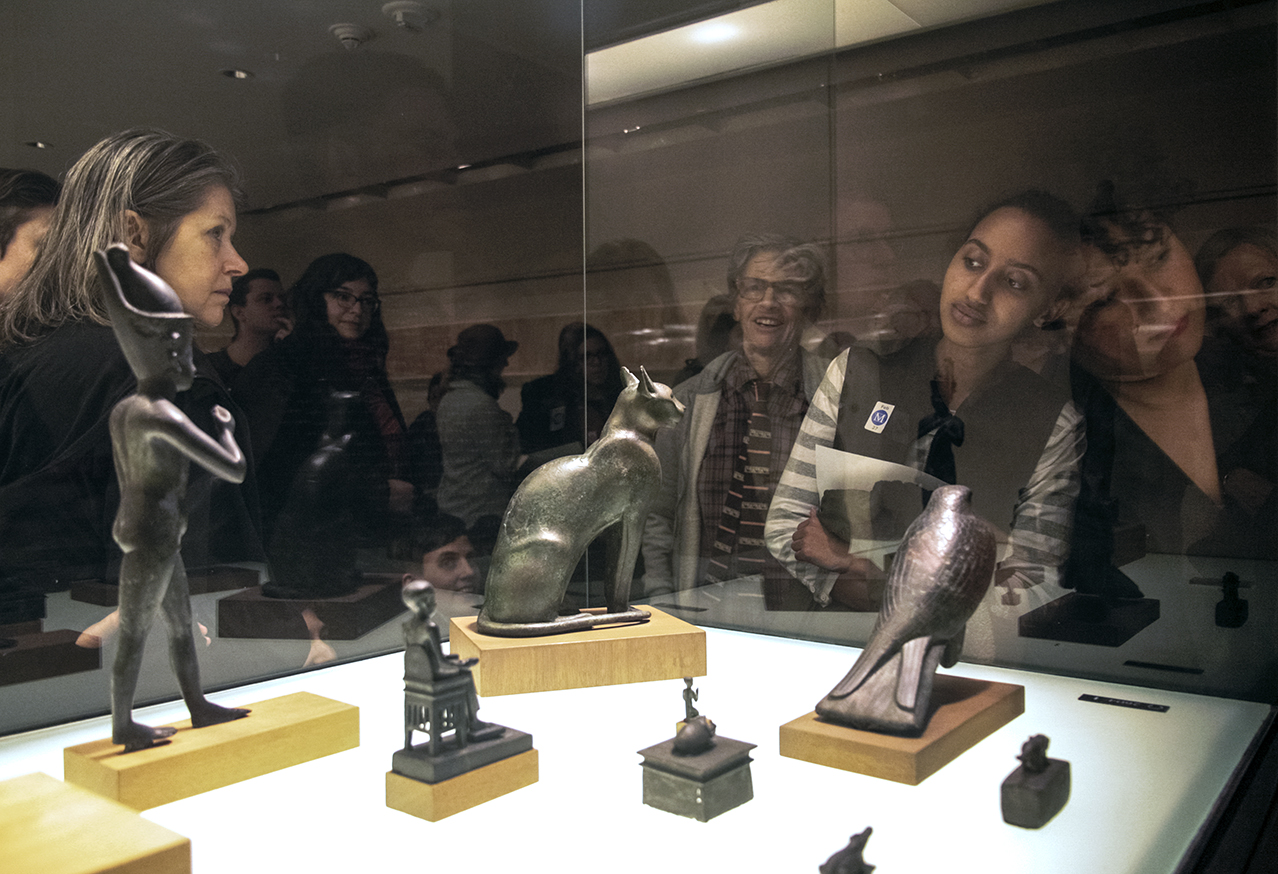 Guests to the Poetry Parade looking at Cat statue 332-30 B.C., located in the Egyptian wing. 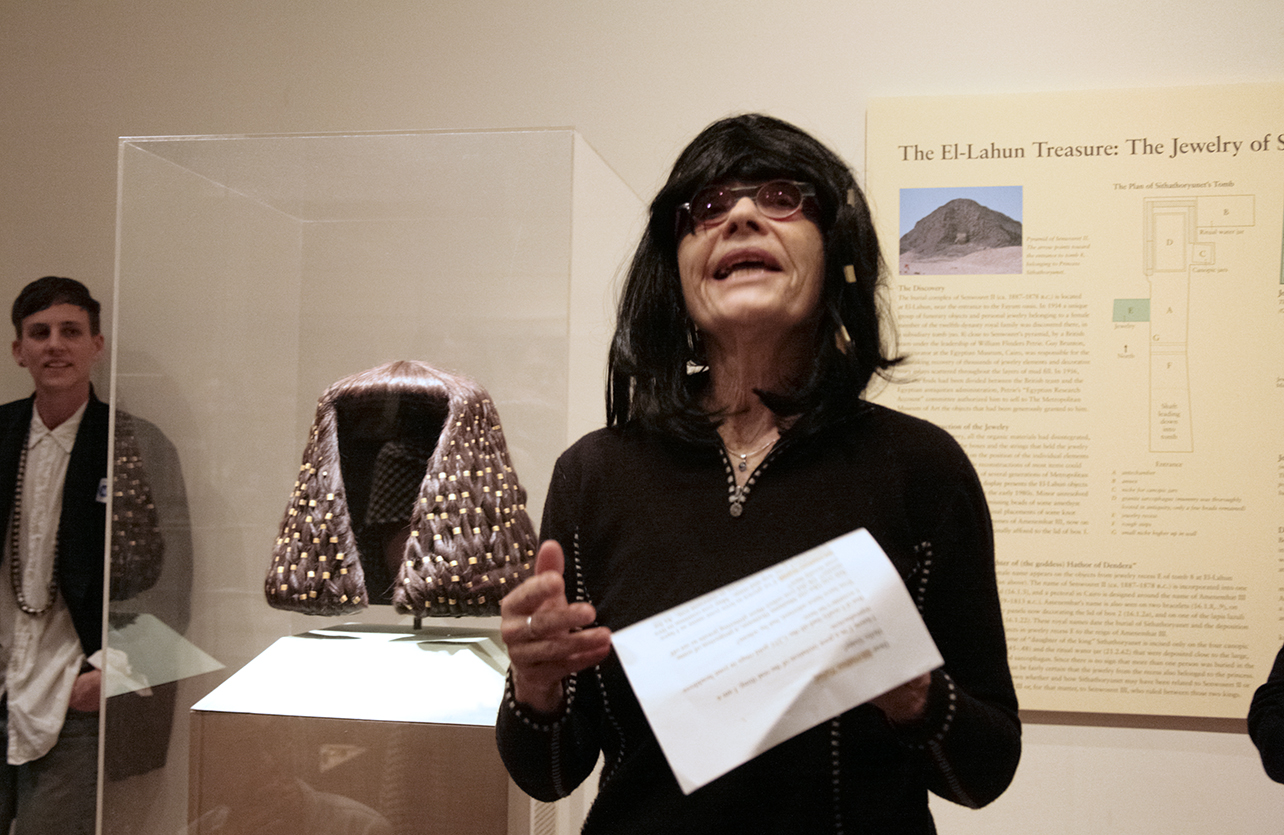 Barbara Hammer reads one of her poems, to an Egyptian wig while wearing a wig. 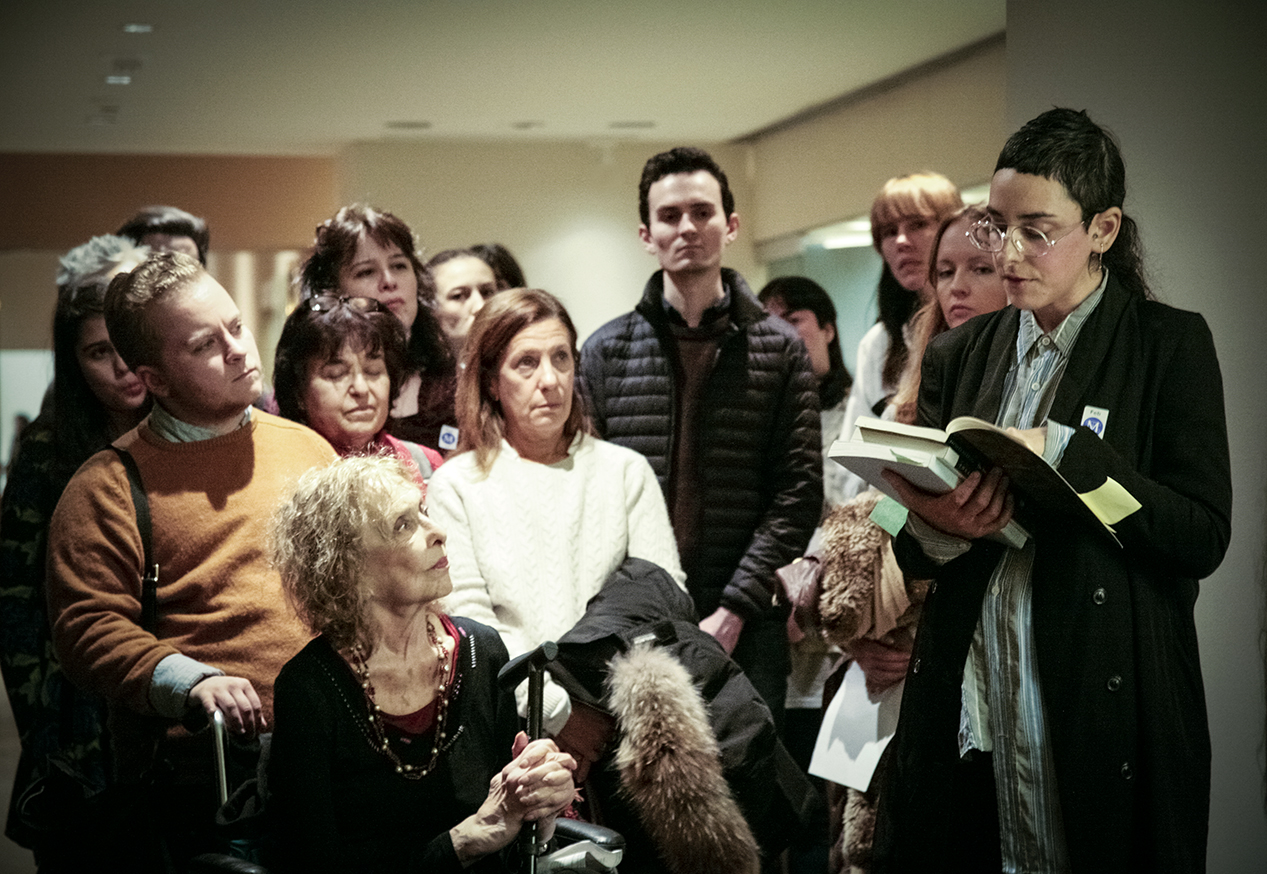 Katherine Hubbard reads excerpts from Jacques Derrida’s The Animal That Therefore I am, Eve Sedgwick’s Touching Feeling, and Greg Bordowitz’s Volition to Cat Statue 332-30 B.C. located in the Egyptian wing. 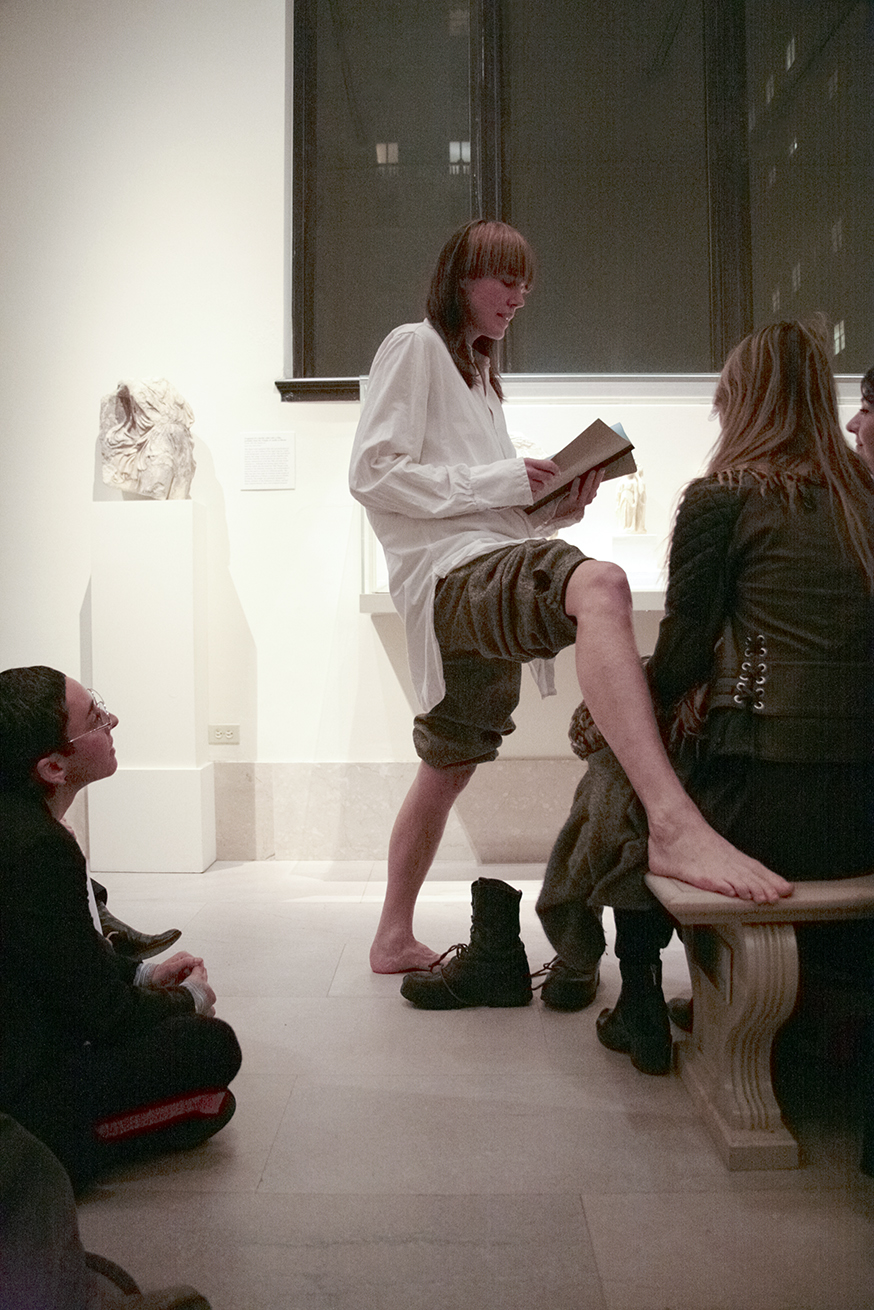 Malin Arnell confronts the audience as she reads to Pair of Eyes, 5th century B.C. 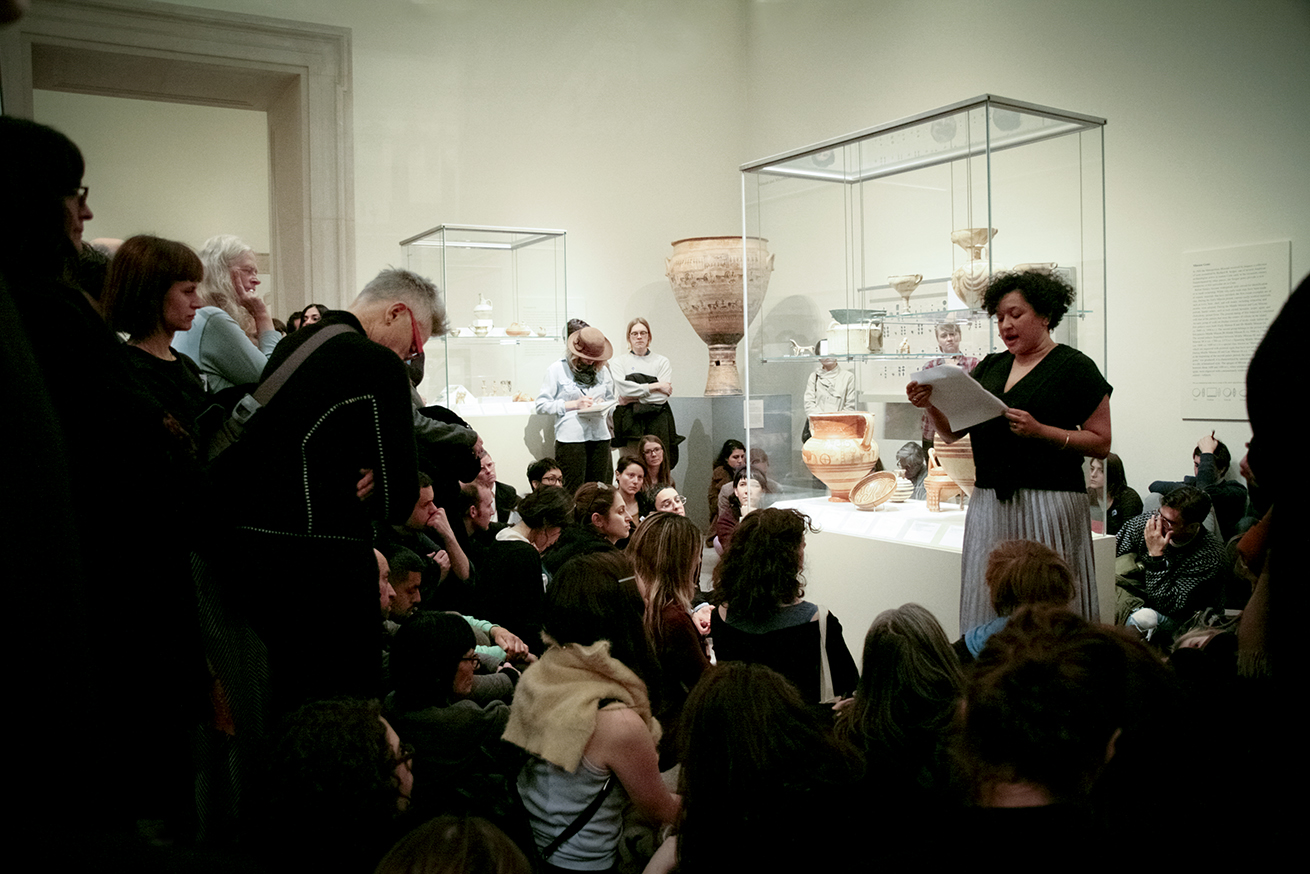 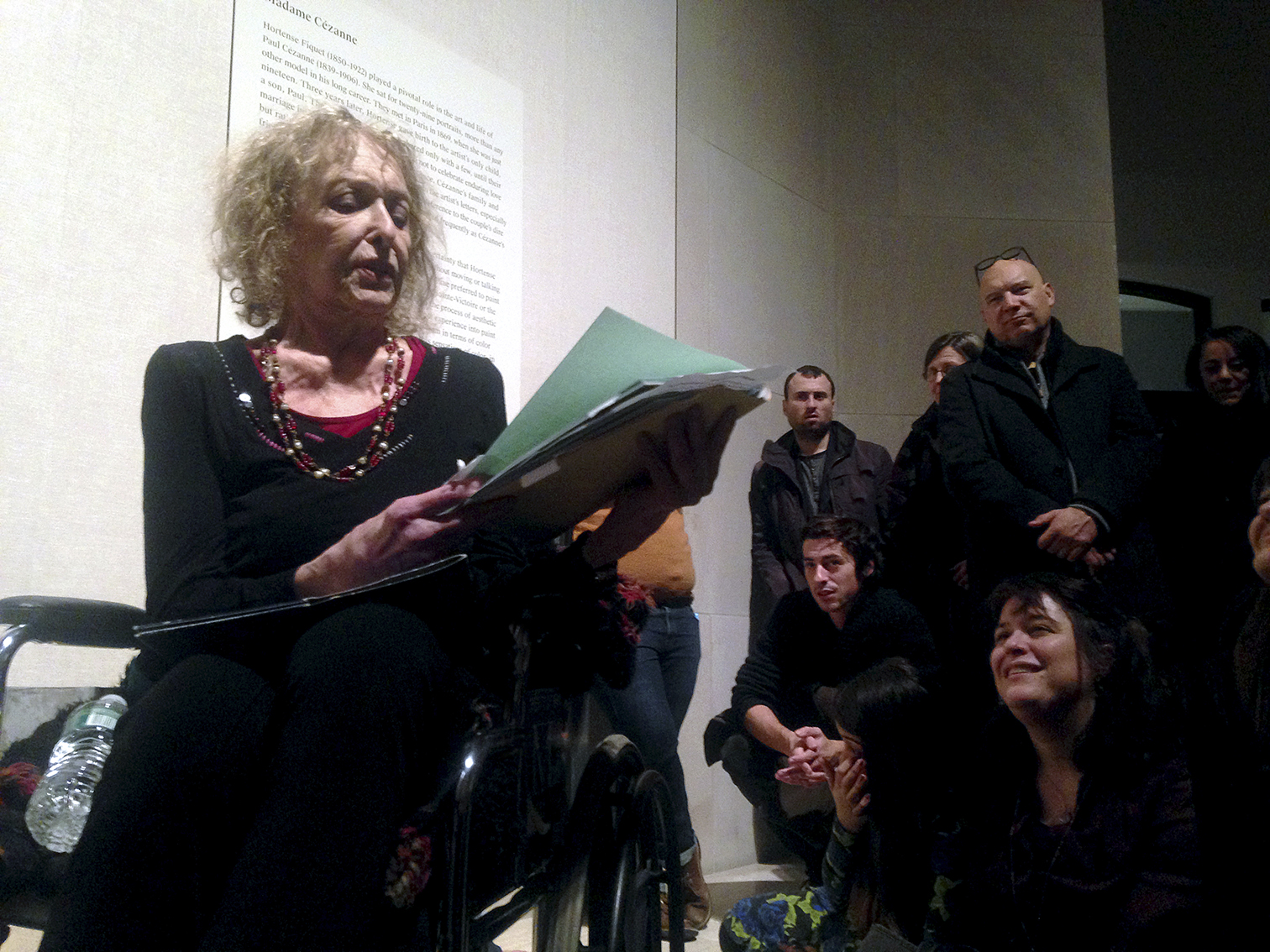 Carolee Schneemann reads excerpts from her book Cezanne She Was a Great Painter, to Madame Cezanne in Red armchair, 1877 on view in the Madame Cezanne exhibition. 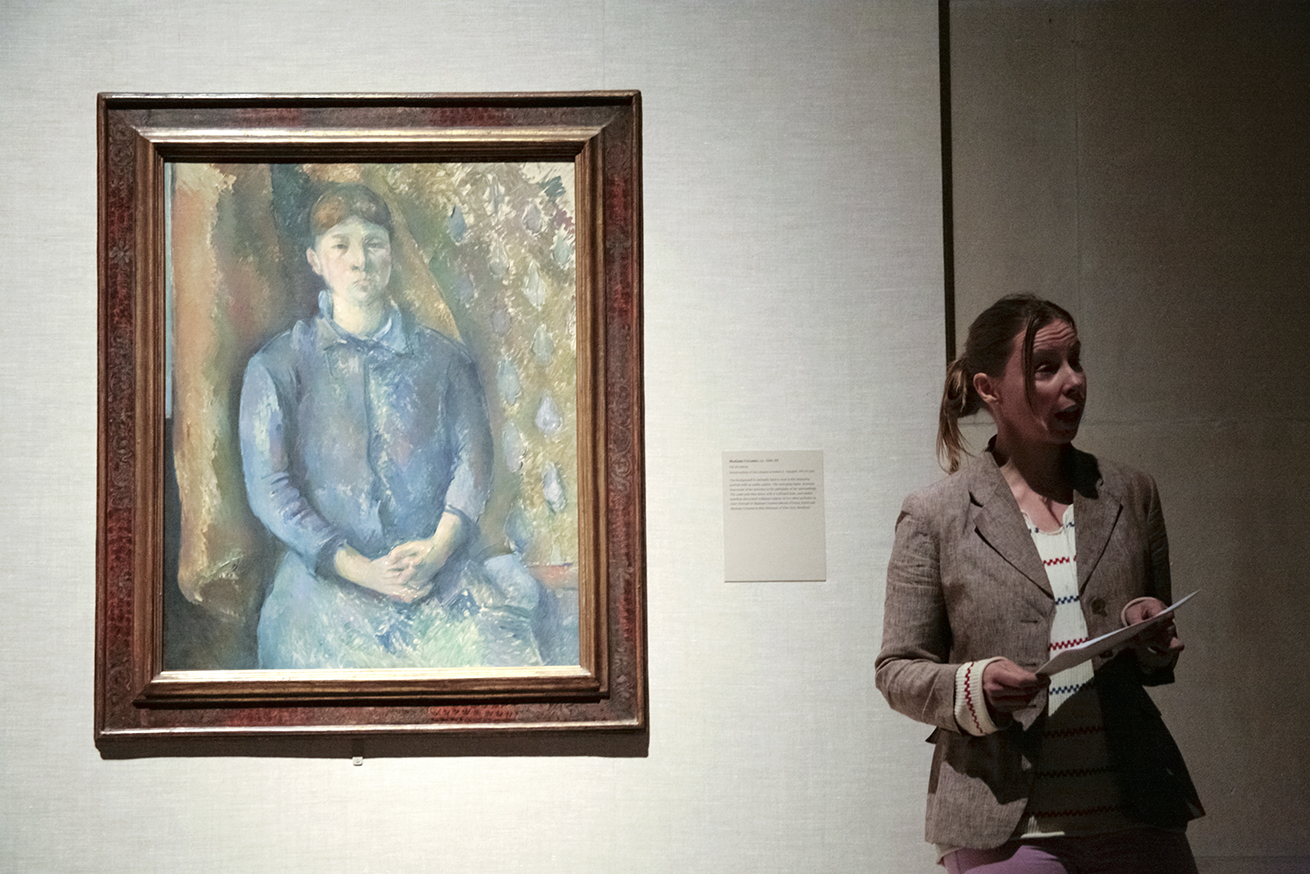 The Poetry Parade for Site and Sight, Whitney Museum of American Art, September 26, 2015
This Poetry Parade responded to the inaugural exhibition America Is Hard to See, while also addressing the new building, its location and histories relating to the evolution of the Meatpacking District and the Whitney as an institution. This series of live readings focused on works from the exhibition as well as specific locations in and near the museum. This parade attended to past and present actions of bodies and uses of this site—a site of ongoing transition with an ever looming question about the assumed benefits of progress, newness and visibility. Justin Allen reads to Food for the Spirit by Adrian Piper